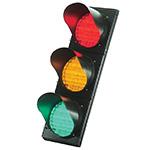 Drivers in Evanston have significantly more time to get through a yellow light than is available just to the south in Chicago.

The Chicago Tribune today published a lengthy article suggesting that Chicago's use of three-second yellow lights on 30-mile-an-hour streets — coupled with its use of red light cameras to issue tickets to violators — constitutes a dangerous combination for drivers.

In Evanston, where there aren't any red-light cameras, city officials say traffic signals offer between four and 4.5 seconds of yellow time. And many signals also have an "all red" phase that adds an extra one to two seconds of cushion before the light turns green for opposing traffic.