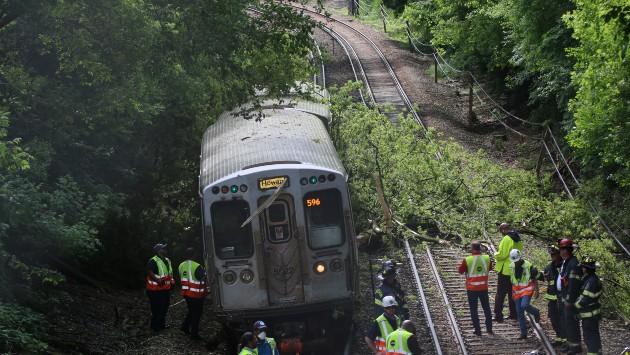 One passenger was transported to St. Francis Hospital after at CTA Yellow Line train derailed shortly around 4 p.m. this afternoon just west of Asbury Avenue in Evanston.

It appears the train, running inbound to Howard Street, had just rounded a curve, which made it impossible for the operator to stop the train in time to avoid hitting the tree that had fallen across the tracks during a storm that swept through the city a few minutes earlier.

Evanston fire officials said there were 10 passengers and two CTA employees on board the train when the accident occurred.

Passengers from the disabled train wait on the Asbury overpass for a bus to take them to Howard Street.

Firefighters and CTA employees evacuated the passengers from the train and a CTA bus was called to transport them to the Howard Street station.

Asbury was closed to traffic in both directions between Mulford and Brummel. The street was expected to remain at least partially closed for some time as the CTA brought in heavy equipment to get the train back on the tracks.

The CTA is advising passengers to use the Route 97 Skokie bus as an alternative and that a shuttle bus service is available between the Howard and Dempster Yellow Line stations.