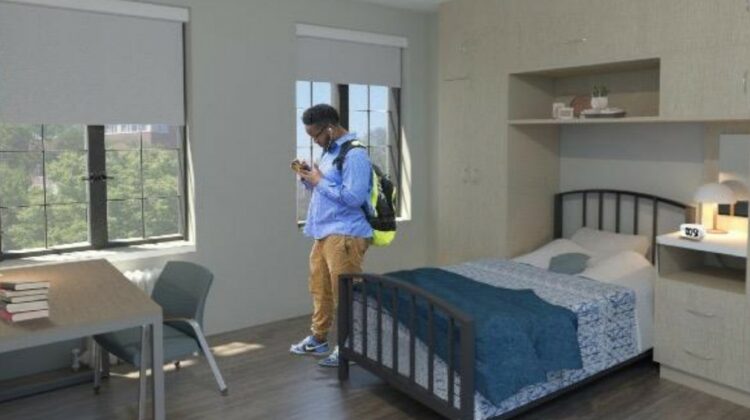 A rendering of the appearance of a renovated large SRO unit at the McGaw YMCA.

McGaw YMCA officials are scheduled to present the group’s $12.6 million plan to renovate the men’s residences at its 1929-vintage building at 1000 Grove St. to the Evanston City Council Monday night.

A presentation prepared for the meeting says the Y “is the largest provider of safe, affordable and accessible housing for men in Evanston” and one of the few remaining single room occupancy options in the Chicago area.

It says the YMCA provides 156 SRO units on the three upper floors of its five-story building at an average rent of $560 per month.

The project would also upgrade basement-level program space for the residences and create a new covered entryway to the basement area on the east side of the building.

YMCA President Monique Parsons says, “We provide holistic services that meet these men where they are in life. We build relationships with them so that we can actually help address their everyday needs and personal goals.”

The non-profit says it has secured about $1.6 million of the funding for the project so far and hopes to complete fundraising and begin construction sometime next year. It expects to seek city approval of permits for the project early next year. It anticipates having to find temporary housing for current residents of the building while he renovation project is underway.

Update 9/22/21: During Monday night’s Council meeting Parsons said she planned to return to the Council later to seek financial support from the city for the project.

Ald. Peter Braithwaite (2nd) said he looked forward to that, adding “hopefully it will be something we can afford to do.”