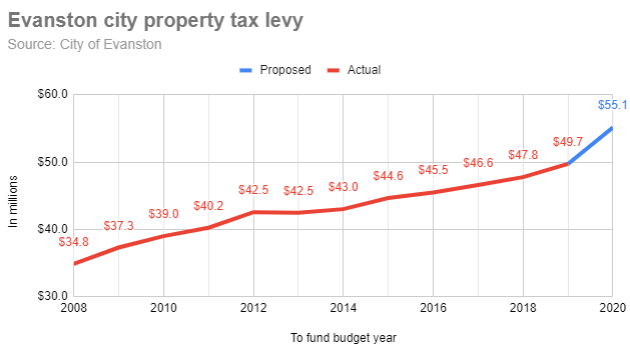 Evanston officials are planning to levy a 10.9 percent property tax increase to fund the 2020 city budget — but they’re hoping the latest reassessment of the city will blunt the impact on homeowners.

The triennial reassessment of Evanston by new County Assessor Fritz Kaegi boosted the total equalized valuation of properties here from $2.7 billion to $4.5 billion — and dramatically shifted share of the total tax burden toward commercial properties and away from residential ones.

So, the city’s chief financial officer, Hitesh Desai, says, even if those assessments are reduced somewhat on appeal, most homeowners are likely to see at least a modest reduction in their property tax bill — unless their home’s individual assessment went up substantially more than the citywide average.

However the response from commercial property owners may be far less sanguine.

The planned 10.9 percent property tax levy increase in the proposed city budget released today is the largest one-year hike in more than a dozen years.

In recent years those increases have ranged from under 1 percent to 7 percent.

Interim City Manager Erika Storlie says factors driving the property tax increase include increase in spending on social services, fire and police pensions, increased debt service expenses for the Robert Crown Center and other projects plus the last of three planned annual increases in money for the solid waste fund.

The city’s tax levy amounts to less than 20 percent of the total property tax. About two-thirds of the property tax goes to fund Evanston’s two school districts while the rest funds a variety of county and regional government entities.