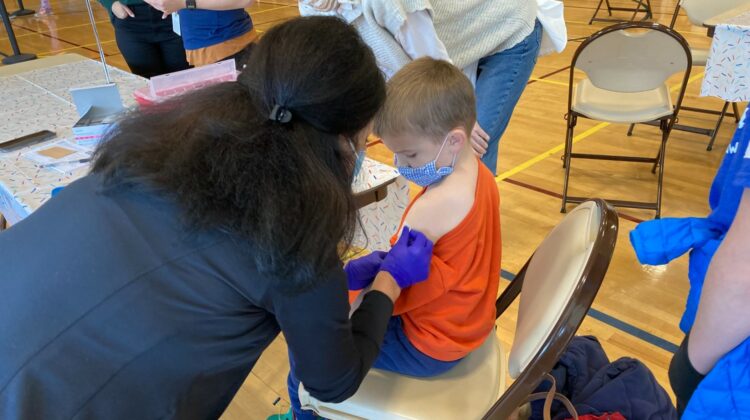 5-year-old Arlo Edward gets his first COVID shot at the Levy Center on Thursday.

Some looked the other way, some whimpered, but for the most part, there were a lot fewer tears than you might expect when children as young as five years old received COVID-19 vaccinations Thursday.

This was the second kids’ clinic sponsored by Evanston/Skokie School District 65 and the City of Evanston. The first, on Saturday, saw all 368 slots filled.

Demand was much lower at the latest session, with only 180 children signed up.

Still, those who did come were glad shots were offered. Children ages 5-11 became eligible for the Pfizer vaccine a few weeks ago.

11-year old Hiro Fujimura received his first shot today. “It hurt for a second but then it was done,” he explained.

The kids’ mother, Shannon Fujimura, is already fully vaccinated. She said it was critical for her children to get the shots as well. “I can’t emphasize it enough,” she stated. “Underline it, with gold stars shooting out.”

It’s unknown yet if District 65 and the city will sponsor another vaccination clinic.

Greg Olsen, the city’s public health manager, said with shots available at so many other places, including pharmacies and medical offices, another school/city clinic might not be necessary.

The Pfizer vaccine requires two doses, so each of the children who were either vaccinated on Saturday or at this latest session will have to return for another clinic shot in December, but those clinics will be for second shots only.

Five-year-old Arlo Edward was among the youngest getting his first shot today.

He didn’t cry, and his mom, Chelsea Edward, said it was “so important” for her son to receive the vaccine.

Chelsea Edward is a COVID-vaccinated cancer survivor, so as someone with an underlying condition, she absolutely believes in whatever medical protection is possible.

Her hope is that “every kid in Evanston” who is eligible for COVID vaccination gets the shots.