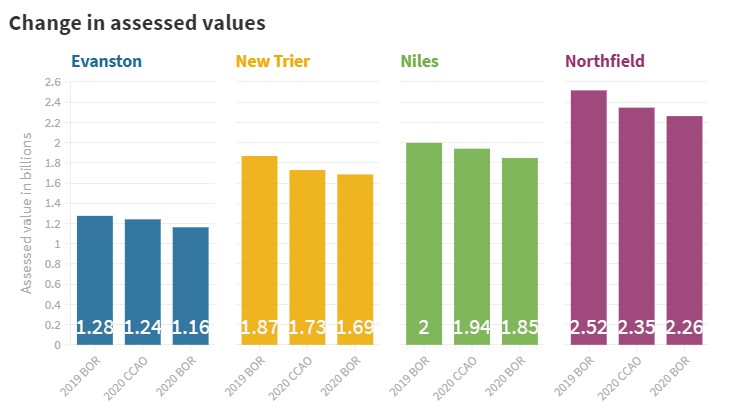 A report released by the Cook County Assessor’s Office this week indicates that property tax bills for local homeowners may rise — even if the assessment on their own homes didn’t change.

That’s because the overall assessed value of properties in Evanston and other nearby townships has declined over the past year, in part as a result of the coronavirus pandemic.

The decline in values means the tax rates charged to fund government services will have to increase to raise the same amount of revenue as last year.

The new assessment values will be reflected on second installment tax bills due to be paid this fall.

Kaegi has attempted to shift more of the tax burden to commercial properties — arguing that they’ve been underassessed for decades. But the state legislature has failed to pass bills that would require commercial property owners to turn over more information to the assessor that he says is necessary to do more accurate assessments.

The new data also shows that the Cook County Board of Review has tended to shift more of the tax burden back to homeowners when it hears appeals of the assessor’s valuation decisions –wiping out most of the tax shift proposed by the assessor.

The overall decline in property values means that even if the Evanston City Council achieves the goal some members have set of not including a property tax increase in the 2021 budget that they are scheduled to adopt this fall, homeowners still could see higher tax bills next year.

However, the $43 million in federal American Rescue Plan Act funds the city is receiving may give them considerably more room to maneuver to avoid a tax hike than they’d have had in most years.