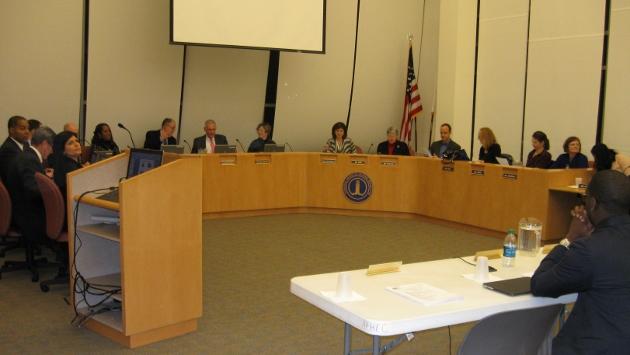 Evanston’s two school boards heard a presentation last night from a consortium of local organizations, of which they are a part, which is launching a coordinated initiative to help the community’s youth navigate life’s problems “from cradle to career.”

Patterned after a Cincinnati group called “Strive,” the idea is to marshal the resources of all the organizations in the community that contribute individually to the group’s overall vision so that they have what they call a “collective impact” that is greater than the combined efforts of each of them operating alone.

The Evanston group’s vision is that “by the age of 23, all Evanston young adults will be leading productive lives, building on the resources, education, and support that they and their families have had to help them grow into resilient, educated, self-sufficient, and socially responsible adults.”

But there are dozens of other groups, including faith-based and sports-based organizations that also provide narrowly focused services that contribute to the “cradle to career” vision.

Consistent with that approach was an agreement by the Evanston/Skokie District 65 School Board and the Evanston Township High School District 202 board to collaborate on a strategic partnership on reading and literacy.

The goal, adopted by a unanimous vote of both boards last night, states that District 65 and District 202 will ensure that all students are proficient readers and college and career ready by the time they reach 12th grade.

The goal, aligned to the Common Core State Standards, provides specific expectations for reading and literacy at each grade level, from kindergarten through 12th grade.

District 65 board member Claudia Garrison, a former middle school teacher, expressed concern that implementation of the goal would require an increase in testing that was a point of criticism of the No Child Left Behind initiative of the federal government.

She was assured by assistant District 65 superintendent Susan Schultz that only a minimal amount of testing, much of which is currently done for diagnostic purposes, would be necessary to measure the effectiveness of the program.

Board member Katie Bailey was concerned about a goal that calls for 100 percent success, implying that such a goal is impossible to achieve.

District 202 Board member Mark Metz replied that the goal is an aspirational one that would be coupled with targeted growth patterns that would indicate progress towards the goal.

“My answer to your question,” he said, “is what number of children that are not ready is acceptable…and what are their names?”

There was little discussion of other strategic partnerships, although District 65 Board President Tracy Quattrocki announced that a group of Kellogg School of Management students at Northwestern University is working on a class project that will identify other potential areas for partnerships that will be presented to the two boards at another joint meeting in June.