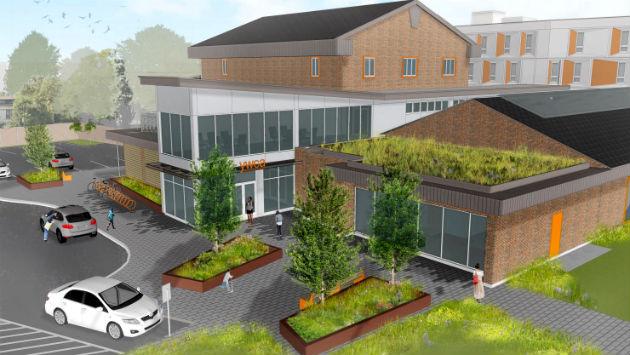 The YWCA Evanston North Shore will seek Preservation Commission approval Tuesday to demolish a house on its campus at 1215 Ridge Ave. as part of a plan to add a new shelter and office addition to the property.

The house is located in the city’s Ridge Historic District, but most of the rest of the YW property is not within the district.

A view of the YWCA property from Ridge Avenue looking north, showing the house in the historic district to be demolished on the left and the existing pool and office buildings to the right. (Google Maps)

The house is now used as the YWCA’s domestic violence shelter. YWCA officials say it is obsolete and cannot feasibly or economically be retrofitted for continued use.

They claim that research with the Evanston History Center indicates that the building has no historical significance and has undergone many alterations over the past half century, dating back to its use as a nursing home before it was acquired by the YWCA.

The YWCA plans to construct a new four-story, 23-unit shelter at the north end of its property.

One home on that end of the property was recently demolished to make way for the new shelter. Another would be removed to provide parking at the north end of the site.

An August 2018 view of the YWCA property from Ridge Avenue looking south, showing where the new shelter and the north parking lot would be located. (Google Maps)

Tuesday’s Preservation Commission meeting will be held at 7 p.m. in the City Council Chamber at the Civic Center.