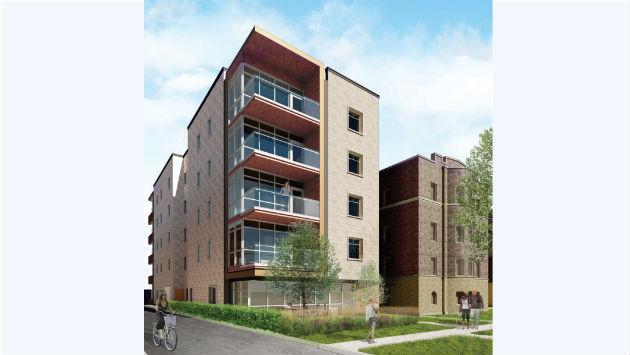 The delay for the Maple project came after the developer last week revised the plans to eliminate the need for a parking variation. That meant the project no longer needs approval from the City Council and gave the ZBA authority to make the final decision on it.

The board decided that change justified taking extra time for its review of the proposal — to give residents who might have been planning to wait until the Cty Council review to offer their comments another chance to be heard.

So, after hearing from the developer and several neighbors, the board voted to continue the case to its July 16 meeting.

Developer Paul Harb and his attorney and architect made the case that the 40-foot-wide lot, which now contains a two-family house, should be redeveloped with the 15 unit building to match the density of the vintage apartment buildings around it and because the developer will be providing two on-site affordable units, which qualifies the project for density bonuses under the city’s inclusionary housing ordinance.

They also contended that the project would not be economically feasible with the smaller number of units that normally would be allowed under the zoning code.

A floor plan for the first floor of the building, showing a planned affordable studio apartment unit.

Five owners of single-family homes or townhomes within a block or so south of the site spoke in opposition to the plan.

Mark Beam of 2128 Maple Ave. said he didn’t think it was good for the neighborhood or the city to grant the proposed variations.

Matt Dougherty of 2122A Maple Ave. said he was convinced the building would attract only students, rather than “families or working folks.”

And Jane Evans of 813 Gaffield Place said she feared the inclusionary housing program would become what she called “a developer racket.”

The apartment proposal was previously recommended for approval by the city staff’s Design and Project Review Committee on a 7-2 vote.

In another case, the board recommended that the City Council approve plans for adding two live-work apartments to an office building at 1124 Florence Ave.

It also gave final approval to expand the living space of a condominium at 1136B Sherman Ave. and to add a second story addition to a home at 2024 Ewing Ave.