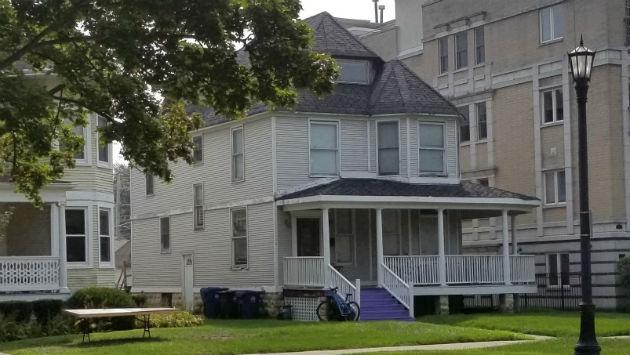 Evanston’s Board of Zoning Appeals voted to postpone action Tuesday on the proposed conversion of a single family home at 1943 Sherman Ave. to a three unit apartment building until it can hear directly from one of the building’s owners.

County records indicate ten judgments have been entered against the building for property standards violations over the past dozen years, and the owners are due in Skokie District Court next month regarding another violation.

Shawn Jones, an attorney for the building’s owners, told the board the planned conversion is designed to resolve the issues with the building — which has nine bedrooms.

Jones says the owners can’t get enough income to cover operating costs for the building, which is surrounded by multi-family properties, while complying with a city ordinance that limits occupancy of a single dwelling unit to no more than three unrelated people.

Board Chairman Mary Beth Berns said that, given the buiding’s history, she’s concerned about how it would be maintained, and member Scott Gingold said, “We need to get Mark [owner Marko Radman] here.”

The plans call for having two bedroom units on the first and third floors and a three bedroom unit on the second floor.

John Karver, president of the condo association for the building just to the south at 1939 Sherman Ave., said, “We’ve had significant concerns about this building for a long time.”

Carver said the condo owners generally “are very supportive of what’s being proposed.”

Karver said neighbors were concerned about the lack of sprinklers in the building, and Jones said the property would be fully sprinklered as part of the renovation work.

The proposal is scheduled to be on the ZBA again for its Sept. 25 meeting.