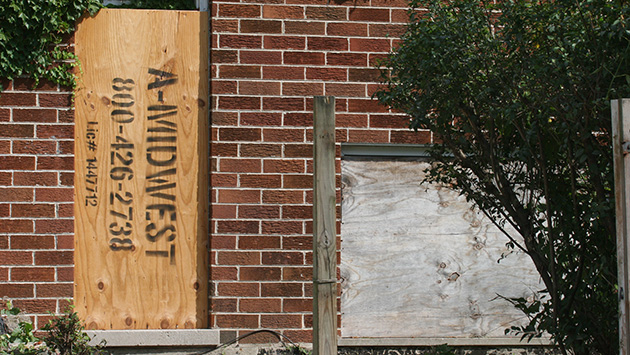 The decision by U.S. District Court Judge Thomas Durkin said the City of Chicago cannot enforce its vacant buildings ordinance against mortgage lenders if the loans are backed by the federally-superivied entities Fannie Mae and Freddie Mac.

In 2011, the Federal Housing Finance Agency sued Chicago to prevent the city from enforcing the ordinance against lenders before the foreclosure process had been completed — arguing the city's vacant property registration fee amounted to a tax on the federal government.

It's estimated there are roughly 300,000 zombie properties nationwide and that the problem is especially severe in parts of Florida.

But what does this mean for Evanston, a city with its own vacant buildings ordinance?

The issue revolves around the existence of “zombie properties.” These are properties that have entered the foreclosure process and are under the control of the mortgage lender. But the lender has failed to take responsibility for the upkeep of the buildings.

“The goal of our program essentially is to make sure any vacant buildings in the city are properly maintained,” said Carl Caneva, assistant director of Evanston’s Health Department.

The first step in this process is to identify what buildings are vacant.

“Generally, once a bank takes [a property] over we have a pretty good record of where that vacant building is,” Caneva said. “They do register pretty quickly, and they are under obligation to register.”

Otherwise, the city is able to identify vacant buildings through the inspection process. Sometimes a resident will call to complain about an untended lawn, for instance, and city inspectors will then respond. If a building is found within violation of a city code, a notice is sent out including a timeframe in which the violation(s) must be addressed.

If no response is received, “we start to do research on the property,” Caneva said, adding that the city doesn’t want to simply issue fines against an unoccupied building.

“In the case where the bank hasn’t come forward and we haven’t registered [the property], the program becomes difficult because it is in a limbo status,” he said. “Somebody walked away and the bank has not picked it up yet. So really there is no one who is going to take responsibility for it.”

In that instance, the city may hire a contractor to correct the issue. If that happens, a lien is issued against the property, which the lender will then have to take responsibility for once they claim ownership of the building.

When the lender assumes ownership, they are required to register the building, which includes a $400 annual fee. They must also submit a plan as to how the building will be cared for in the future. The building is then inspected by a city, which costs $500, and the lender is then informed of all liens and violations at the property.

After those steps are completed, “we still do a monthly check up to make sure it’s being kept up,” Caneva said.

Currently the city has 153 registered vacant properties, Caneva said. That's about half of one percent of all the housing units in the city. Since the program begain in 2009, a total of 169 properties have been registered at one time or another.

As for who pays for correcting the violations and the lien, if the property has one, that’s up to the bank and the prospective buyer, Caneva said. However, he said the property cannot be occupied until all violations have been resolved.

Has Evanston had any issues getting lenders to register these buildings with the city?

“From the time I’ve been involved with program, about a year, I haven’t seen many instances where that has taken place,” Caneva said.

“One or two times we have had to call the bank and tell them this is problem,” he said. But once a property is registered, an agent of the bank is assigned to the property and all dealings with the city are conducted through them. Caneva said the city hasn’t had many issues with these agents not complying with the ordinance.

But what about the ruling against Chicago? Does Evanston plan to change its ordinance in response to that?

“As of right now that does not affect how we act or how our ordinance is in effect,” Caneva said. “We are a home rule city and we have our own ordinances.”