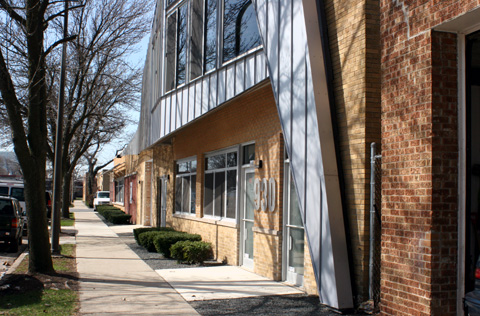 The view down the block from the Cinema Business Condos, 930 Pitner Ave.

The committee majority rejected objections by owners of two businesses on the block who said the change would lead to on-street parking congestion.

The area, running from the alley north of Main Street to Lee Street on the west side of Pitner, now has a mix of commercial uses, ranging from an auto body shop to the offices of a landscaping firm.

But a building on the block, at 930 Pitner once used by a film production firm, has recently been renovated by architect Andy Spatz and turned into the Cinema Business Condos.

He’s now acquired the building next door at 940 Pitner and hopes to turn that into live-work condos.

While some neighboring business owners objected to the zoning change, others have said they favor it and believe it will do them no harm.

Spatz has argued that converting the tired commercial buildings to new uses will increase property tax revenue for the city and that the redeveloped buildings will include enough off-street parking to avoid creating on-street parking problems.

The plan is scheduled for review by the full Plan Commission next month. After that the zoning change will need City Council approval to take effect.