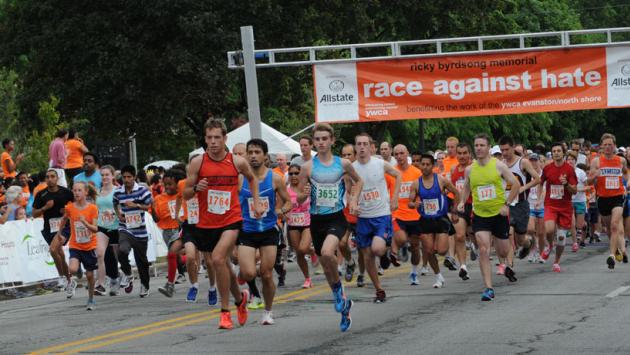 About 5,500 people are expected to participate in the 16th annual Ricky Byrdsong Memorial Race Against Hate on Sunday, June 21, at Long Field in Evanston.

The event includes a 5K run/walk, 10K run and youth mile. The Race honors former Northwestern University basketball coach Ricky Byrdsong, who was killed in his Skokie neighborhood by a white supremacist while walking with his young children in June 1999.

Started by his widow Sherialyn and her family and friends in 2000, the community event honors Byrdsong’s legacy of working with young people and brings attention to the need to combat hatred in all forms. In 2007, Sherialyn entrusted stewardship of the Race to the YWCA Evanston/North Shore.

The 5K walk/run and 10K courses are scenic races down Sheridan Road and along the shores of Lake Michigan — with the 10K looping through the campus of Northwestern University. The 10K race begins at 7:30 a.m., the 5K walk/run will start shortly thereafter and the youth mile, an out and back course on Sheridan Road, kicks off at 9:00 a.m. for ages nine through 13 and at 9:15 a.m. for ages two through eight.

“Registration is as strong as ever,” said Karen Singer, President and CEO of the YWCA Evanston/North Shore. “We are anticipating another huge turnout and are honored that the race and all that it stands for means so much to so many people.”

Cash awards are given to the overall, masters, and senior (70 and over) male and female top finishers in the 5K and 10K.

Pre-registration online at www.ywca.org/RAH2015 closes at noon on Tuesday, June 16. Pre-registration fees, which includes a technical t-shirt along with a race bag, are $39 for the 5K/10K and $10 for the youth mile.

Pre-registration and packet pick-up events will take place in Evanston at Whole Foods Market on 1640 Chicago Ave on June 17, at Murphy’s Fit at 513 Dempster St. on June 18 and 19, and at the YWCA Evanston/North Shore at 1215 Church Street on June 20. Check the YWCA’s website for specific times and additional details.

Participants can also register on Race Day beginning at 6:15 a.m. for a $42 fee; registration for youth mile is $15 at the Race.

Pre- and post-race stretching will be led by AthletiCo Physical Therapy and Redefined Fitness, and the program includes on-field refreshments provided by Whole Foods, Starbucks, Cooked and Mark Vend. In addition, the post-race ceremony will include words from the Byrdsong family, an awards presentation and a performance by Line Dance Divas.