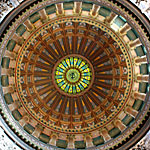 SPRINGFIELD — Once again, downstate Illinois lawmakers in both parties have sent to the House legislation that would allow people to carry concealed weapons.

SPRINGFIELD — Once again, downstate Illinois lawmakers in both parties have sent to the House legislation that would allow people to carry concealed weapons.

And, once again, the effort appears headed for defeat.

The House Agriculture and Conservation Committee on Tuesday voted, 11-1, to move forward HB5745 for a vote later this spring. The legislation would allow sheriffs in the state's 102 counties to issue concealed-carry permits. People — those without a criminal record — would pay $65 to apply for the permit and complete firearms training.

State Rep. Brandon Phelps, D-Harrisburg, said Illinois is the only state in the nation that bans its residents from carrying a concealed handgun.

"If (concealed carry) is so bad, why are the other state's not trying to repeal it," Phelps asked the media after Tuesday vote.

The argument to join the other states failed to persuade Rep Kelly Burke, D-Chicago, the lone representative to vote against HB5745 in committee.

"I am from Cook County," Burke said. "And concealed carry is not popular with law enforcement or voters back home."

"Concealed carry is a geographic issue in Illinois," Burke said. "And since the geography is not going to change, we need to work on our differences and not just jam legislation through the House."

Former state Rep. Bill Black, R-Danville, said concealed carry is one of a handful of issues that splits the General Assembly by location, not by political party.

"You get a downstate-suburban versus Chicago regionalism," Black said. "And it's only getting worse."

Black served 25 years in the Illinois House, and he has seen several failed attempts to pass concealed-carry legislation.

"Folks in Chicago are not comfortable with firearms. The thought of someone carrying one upsets them," Black said. "I don't think concealed carry will ever happen in Chicago.

But Phelps said he thinks a coalition of downstate and suburban lawmakers may be able to succeed —this time.

"I think we're as close as we've ever been," Phelps said Tuesday. "There are some people that are leaving office who have said they would vote for it this time. We're very, very close."

It will take 71 votes — not a simple majority of 60 — for the House to approve concealed carry. Lawmakers decided long ago that a statewide concealed-carry law would pre-empt local laws.

State Rep. Don Moffitt, R-Galesburg, said concealed-carry supporters need to focus on the big picture this year, and not push for legislation that cannot pass the House or the Illinois Senate.

"This is just from a guy who has been around the track a few times. The objective here is to move toward concealed carry, and I support that, "Moffitt said. "Keep in mind, the goal is to pass permit to carry."

Phelps said he has 70 votes. Last May, 65 state representatives voted for concealed carry. A vote on HB5745 is not scheduled in the House and, Phelps said, he may change the legislation before the final deadline in late May.