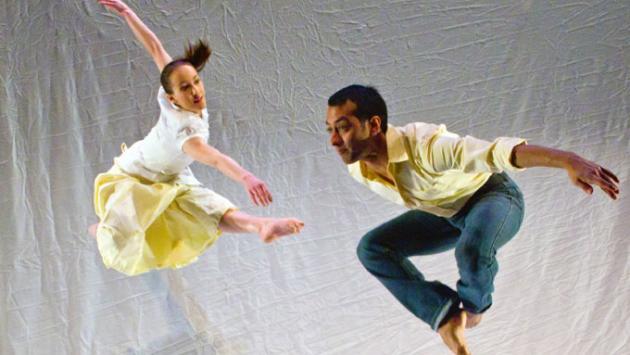 The production will feature two premieres and a Chicago debut that juxtaposes the glamour of Hollywood with the xenophobia facing Mexican-Americans in nearby California communities.

As the U. S. reexamines immigration policy, “Sombras” aims to humanize the migrant experience.

They will be held at the Ballroom Theater of the Marjorie Ward Marshall Dance Center, 10 Arts Circle Drive, on the University’s Evanston campus. A talk-back with the choreographer and dancers will follow the Friday, April 15 performance.

The project is guided by the University of Wisconsin-Milwaukee Department of Dance faculty in conjunction with an MFA thesis project and is presented by the Northwestern University School of Communication’s dance program.

Voices past and present collide in “Cositas,” (“Little Things”) Valentine-Martinez’s new solo dance. “Who cares, just another ” explores the experience of a middle-class Mexican-American returning home as a tourist.

Valentin-Martinez, a senior lecturer in Northwestern’s department of theatre, grew up in a small town outside of Guadalajara, where dance was important both in his family and his community — from weddings and weekend parties to birthdays and school events. At age 7, he and his family moved to the San Francisco Bay area. As a professional dancer, he toured internationally with Garth Fagan Dance.

Since 2003, Valentin-Martinez has devoted his time to teaching and developing his own choreography projects in Chicago, including the musical adaptation of Sandra Cisnero’s “The House on Mango Street” (2009) at Steppenwolf Theatre.

He also developed choreography for the Joel Hall Dancers, Luna Negra Dance Theater and a multimedia performance that has been performed throughout California and at El Museo del Barrio in New York.

Tickets for “Sombras” are $15 for the general public and $5 for students; they can be purchased online at brownpapertickets.com or in-person at Northwestern’s Marshall Dance Center one hour before the show.