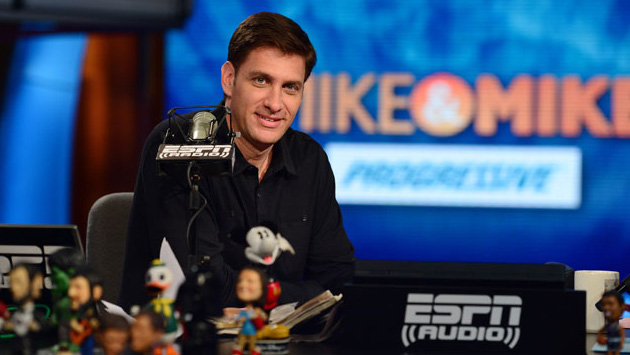 He also will be an honored guest during the festivities planned for the Oct. 4-5 weekend celebration.

Greenberg, and his “Mike & Mike” co-host Mike Golic, will broadcast their early morning show live from Northwestern’s Evanston campus Friday morning, Oct. 4, in advance of the Saturday, Oct. 5 Homecoming game between the Wildcats and the Ohio State Buckeyes, as part of the third annual ESPN Audio Fall Football Tour. Their drive-time show airs Monday through Friday, from 5 to 9 a.m. Central Time.

In addition to grand marshal, Greenberg was honorary football captain for Northwestern’s 2013 home football opener against Syracuse. The Cats defeated the Orange 48-27.

“It’s a tremendous honor to be chosen as grand marshal for Northwestern University’s Homecoming,” he said. “Fresh off my triumphant turn as football captain, so far this has been a special season and hopefully the best is yet to come.”

As this year’s grand marshal, Greenberg will ride in the lead car during the 6 p.m. Friday, Oct. 4, parade as it works its way from the intersection of Sheridan Road and Lincoln Street, south toward the 6:45 p.m. Pep Rally in Deering Meadow.

During the Pep Rally, Greenberg will announce the results of the Homecoming court voting and crown this year’s Homecoming King and Queen. Entertainment begins at 7:15 p.m. Friday when the ‘90s rock cover band, Mike & Joe, performs for the revelers. The public is invited to attend.

Both the 6 p.m. Friday Homecoming Parade and 6:45 p.m. Pep Rally are open to the public, as is the 7 p.m. Saturday, Oct. 5 prime-time Homecoming kick-off game between the Wildcats and Ohio State at Northwestern’s Ryan Field. The game will be televised nationally.

A native New Yorker, Greenberg is a 1989 graduate of Northwestern’s Medill School of Journalism, Media, Integrated Marketing Communications. During his four years on campus, he was a member of the Medill Student Advisory Council and the Theta Chi fraternity.