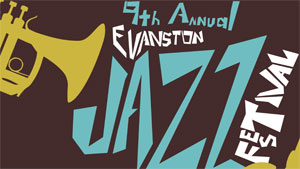 The festival offers a full day of non-competitive, educational workshops and performances by middle and high school jazz ensembles, culminating to an evening performance of orchestral jazz.

The evening performance is open to the public and begins at 7:30 p.m. with a set from ETHS’s own Jazz Ensemble.

The Jazz Festival will be held in the ETHS Auditorium, 1600 Dodge Ave. All seats are reserved and parking is free in the school lots off of Dodge Avenue and Church Street.

Tickets are $20 for adults and $15 for children, students with ID, and seniors. A $50 family ticket covers admission for two adults and up to four children. Call (847) 424-7848 or order tickets online at www.ethsjazz.com.

The Evanston Jazz Festival attracts more than 400 student musicians from school bands around the Midwest.

The festival focuses on educating high school and middle school jazz students and showcasing their talents. Activities include workshops, clinics, and master classes offered by jazz musicians and educators, and a special workshop on computer music technology.

Each participating band or combo performs and then receives both live and recorded feedback and coaching from expert judges. All proceeds from ticket event sales go toward enhancing the ETHS Jazz Program.

“The students have a great day listening to their peers and spending time with jazz professionals,” says Dr. David Fodor, director of bands at ETHS and the Festival’s founding director. "Tue jazz experts come here and provide substantive, constructive feedback for the student musicians.”

The mission of the CJP is “to present high quality musical performances and music education programs that will bridge gaps in genre, artistry and diversity.” Winner of the 1995 Cognac Hennessy National Jazz Search, Orbert was one of Chicago Tribune's 1995 “Arts People of the Year.”

Saxophonist-clarinetist Victor Goines, the director of jazz studies at Northwestern Unversity, will perform with the CJP.

Drawing from his New Orleans roots, Goines has performed throughout the world. A member of the Lincoln Center Jazz Orchestra since 1993, Goines has performed and recorded with The Victor Goines Quartet, and collaborated with artists such as Wynton Marsalis, Dizzy Gillespie, Lionel Hampton, Dianne Reeves, Bo Didley, Freddie Hubbard, Damon Short, Freddie Green, and a host of other renowned musicians and ensembles.

The daytime highlight will be a noontime concert by Grammy-winning fusion jazz percussionist Paul Wertico. For many years the drummer with the Pat Metheny Group, Wertico currently leads numerous unique jazz groups. Wertico has been described as an inspired and restless innovator,” and his playing has been compared to that of “an Impressionist painter.”

The department also takes students on semi-annual trips, which over the past few years have included Montreal, New York, Orlando, New Orleans and Nashville.

The extensive jazz program includes nine combos and three big bands. The school’s top jazz ensemble and combo have performed in Europe and Japan, as well as at the Chicago Jazz Festival and other jazz venues around the Chicago area.