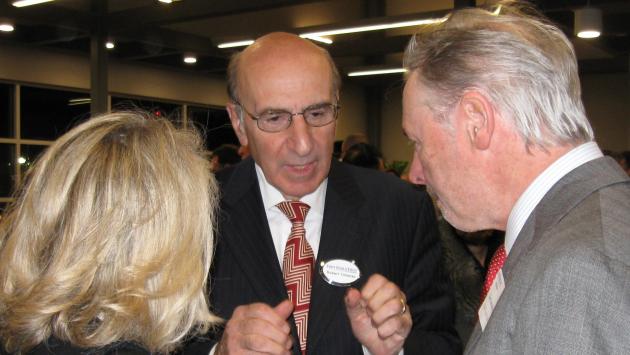 Evanston-based First Bank & Trust opened its eighth office, its “green” bank, Tuesday at the corner of Dempster Street and Crawford Avenue in Skokie.

Serving as master of ceremonies for the event was former Evanston Mayor James Lytle, one of the bank’s managing directors, who noted that the branch is the first banking office in the Midwest designed to meet  LEED gold certification standards as established by the U.S. Green Building Council and verified by the Green Building Certification Institute.

Yohanan said that the bank’s commitment to the environment is a natural extension of its motto to “put community first.”

The Skokie mayor welcomed the branch to his community, the bank's second office in Skokie, and expressed the hope that the bank’s environmental leadership will serve as a model for other businesses opening in his suburb.

Lytle told the several hundred customers who packed the lobby for the opening that some 90 percent of the construction waste of the building was recycled and diverted away from landfills. Large, floor-to-ceiling windows bring daylight in the building and supplementary light is provided by energy-efficient LED light fixtures.

Heating and cooling are provided by a geo-thermal heat pump that extracts energy embedded in the earth, allowing for a 25 percent reduction in power consumption from non-renewable sources. It also has an underground detention system that collects storm water runoff and returns it, filtered, to the storm sewer.