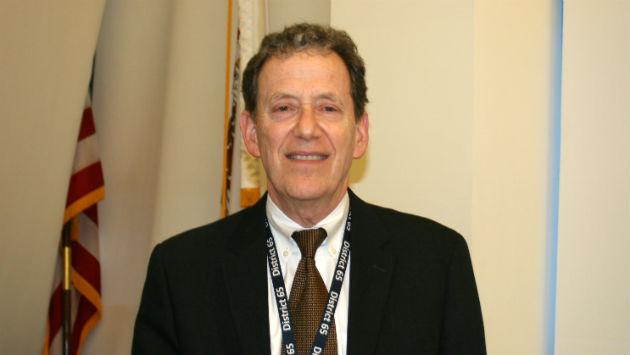 Evanston/Skokie District 65 Superintendent Paul Goren says the current political environment is partly to blame for a near doubling of suspensions this school year.

“After the 2016 presidential election we’ve seen a rise in more open bullying,” Goren says. For example, a kid will turn to somebody of Latinx background and say, “The wall’s going up.” Or “a kid will feel license to use their voice in a much more angry way.”

But beyond the political climate, Goren says, there is a need to make sure that “kids feel engaged and recognized and assisted and cared for in the classroom and in the school,” so they step back from crossing a line.

The district’s suspension policy was changed before he became superintendent four years ago, Goren says. The board was concerned about the school-to-prison pipeline and “overrepresentation of kids of color and especially young black children who were being suspended at higher rates than other kids.”

The policy stated that every offense with a suspension over five days must go to the superintendent’s desk.

There was also an attempt to ratchet up the alternatives to suspension program, in which social workers work with children and parents to try to address root causes instead of just suspending the kid.

“We saw some drops in suspension,” Goren adds, “but there’s a feeling in the environment that kids might be acting up a bit more now.”

“Our teachers have faced a growing challenge to serve students who may not be responding to classroom-based interventions,” she says, “and the district’s response has not kept pace with the number of kids who desperately need resources and supports.”

Goren says that, after settling the teachers’ contract last year, the district added an extra day of planning for teachers that had been taken away eight or nine years ago. To cover the kids during that planning day, social workers were hired and now teach classes on social, emotional and equity learning.

The goal is teaching children how to “de-escalate, contain their emotions, work together in a group and control themselves when they’re in a situation that might push their buttons.”

Goren says that teachers can also include social and emotional skills within their own lesson plans.

“With the additional social workers and psychologists,” he says, “we are doing the best we can to provide services to kids who are coming with a wide range of concerns.”

While acknowledging changes, Zelinski says, “Teachers are looking for a continuum of supports for kids and classrooms that will help serve kids who really need them and avoid suspension.”

“We also need more social workers, more behavior interventionists and more training for all teachers in order to support our kids.”

Goren outlines a systemic approach to suspension, setting up school culture and climate teams to look at the data they have – how many suspensions, who is being suspended, by race and by gender – and then determine what can be done to build a sense of community, safety, and relationships.

In 2015, the State of Illinois changed its suspension policy with Senate Bill 100, which banned “zero-tolerance policies” and required school systems to limit the use of suspension and expulsion as much as possible except for weapons or drug offenses or when a student substantially poses a threat to the school community.

The Illinois Education Association suggests that the school board should work out changes to the teachers’ contract regarding suspensions, including how a threat to safety is defined and how to support students while on suspension and when they return.

In the last contract, Zelinski says, “We bargained several new pieces of contract language. In particular, there was great concern with kids in crisis being returned to classrooms without any discussion with the teacher or plan for moving forward.”

Though the new language attempts to address this issue, she adds, it continues to be problematic.

Going forward, Zelinski said, “We will be reviewing all the requirements and mandates of SB100 and will work with the district to create strategies and plans to address the needs of the students.”

“We would like to see IEA play a role in developing and creating plans to support student learning and behavior,” she says.

But Goren says he doesn’t know if further changes are needed to the contract.

“We share the importance of serving our kids,” he says, but “I hesitate to create something siloed,” so that only someone with expertise would deal with a child who has an issue.

“Kids spend the lion’s share of time in the classroom,” he said. “Rather than something in the contract, it might be professional learning opportunities on the social and emotional learning side.”

“All of the adults in the building have to understand the range of issues that kids have, across all levels, all races, all economic groups,” he added, “and use the expertise that the district has to create an environment conducive to learning and opportunities for resolution of issues or concerns.”