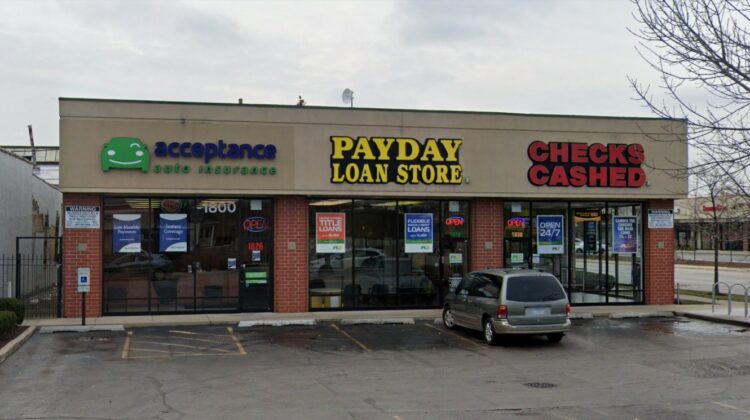 The payday loan store at 1828 Dempster St. in a November 2018 image from Google Maps.

“Out of Business.” That sign is nothing new the past 18 months.

Thanks to the coronavirus pandemic, sales for many merchants dried up, doors were shut, and employees were let go.

But all across Illinois, a state law passed earlier this year has led hundreds of certain types of stores to close, including at least one in Evanston. And that’s exactly what many legislators and consumer advocates wanted to happen.

The companies in question offered payday loans and other short term, high interest loans that critics argued keep borrowers trapped in a never-ending cycle of debt. They can’t pay everything back, these critics say, so the customers end up borrowing even more.

The term “payday loan” relates to the usual length of the loan, about two weeks, the time between paydays for many borrowers. Payday loans require full repayment on the due date, plus the fee to borrow. There are also short-term loans where a borrower’s auto title is held as collateral and short-term installment loans, that allow repayment over a longer time than payday loans.

Amounts borrowed are generally a few hundred to a few thousand dollars, to customers who often have “subprime” credit ratings, making it unlikely that a bank will conduct transactions with them.

Kesha Warren, of suburban South Holland, says she borrowed $1,250 on a car title loan to help keep her business afloat, but ended up owing not just the principal, but also $4,200 in interest and fees, according to a video produced by the Chicago Community Trust, an organization favoring interest caps on such loans.

Charla Rios, a researcher with a nationwide group, the Center for Responsible Lending, says payday loans and other similar instruments “cause much more harm than good.”

Before Illinois passed its Predatory Loan Prevention Act, payday and other short-term loans could reach as high as 404% annual percentage rate. The new law caps such rates at 36% APR, in line with similar legislation in 17 other states and the District of Columbia.

Even 36% is more than double what someone with bad credit would pay for a car loan, according to U.S. News & World Report, although car loans are usually for much higher borrowed amounts with longer repayment periods.

The nationwide organization representing online lenders says consumers are actually being hurt by the Illinois law, with fewer borrowing options available for those who might not qualify for money from a bank, savings and loan, or credit union.

Andrew Duke, executive director of the Online Lenders Alliance, calls the law “a solution in search of a problem.”

A federal consumer agency, he says, saw only 1% of complaints from the public in 2020 relate to personal loans.

“That data,” Duke says, “says customers by and large don’t have problems with small loan products.”

“Rate caps,” Duke adds, “don’t lower the cost of credit but rather lower access to credit.”

Lenders also say the focus on annual percentage rate can be misleading, because while 300-400% is the yearly rate and may sound extremely high, the actual amount paid back for a small loan is relatively low if the loan is paid back on time. For example, before the new Illinois law took effect, the fee for borrowing $100 was $15.50 for a two-week loan.

But backers of the law say borrowers often can’t make the due date, the loan is rolled over, and the customer is buried in an ever increasing amount of debt. Or, the customer does pay the loan on time, only to borrow again a few weeks later.

Brent Adams, of the Illinois-based Woodstock Institute, a liberal policy study group, says borrowers initially feel they will be able to repay say, $500 on time.

But, he says, “research shows that a trap is more common than not,” because the borrower can’t make the due date, and has to extend the loan, “buying more time with a new fee tacked on. The average payday loan borrower,” Adams says, “rolls the loan over a lot”

Duke, of the online lenders group, says short-term, low dollar loans can be a far better alternative to missing bill payments, piling up credit card debt, or even filing for bankruptcy.

When loan volume goes down, Duke says, “other harmful options go up.”

He says the interest cap in Illinois will force many online lenders to discontinue business here, because it would be impossible to make a profit.

“I suspect there has been a pretty substantial pull-back,” he says.

But critics say high interest on such loans can cause the exact same problems, such as missing other payments or ultimately heading to bankruptcy court.

One of the driving forces behind the Illinois law was the legislative Black Caucus.

According to the State of Illinois, more than half of the short-term, high interest borrowers made less than $30,000 a year, in the period 2012-2019. Transaction value over that time was nearly $7 billion.

While Evanston does have a sizable population of all races, it is primarily an affluent community with less appeal for bricks and mortar payday loan stores, even before the new Illinois law.

In fact, nine years ago, Evanston City Council limited the location of payday loan stores to a handful of business areas. The three such stores at the time did not have to relocate, but any new ones would have been limited to the few sites.

There are several financial literacy programs available in Evanston, for consumers hoping to learn how to better deal with money, or perhaps, with the lack of it.

The City plans to renew a program with First Northern Credit Union, which was put on hold due to the coronavirus pandemic. The local YWCA, as well as Wintrust and Byline banks also have similar offerings.

The interest cap law has had a dramatic impact on the short-term loan business in Illinois. A state study found there were 1,578 licensees offering short-term loans of various types and lengths at the end of 2019.

According to Adams of the Woodstock group, 75% of those had closed as of this past July.

And Evanston, it seems, may no longer have any. A search using Google maps shows most of what used to be listed as payday loan stores are gone.

And what may have been the last one, at 1828 Dempster, is empty as well. An employee of the check cashing business next door told Evanston Now that the payday loan shop shut its doors four-to-six months ago, not long after the Illinois interest rate cap took effect.