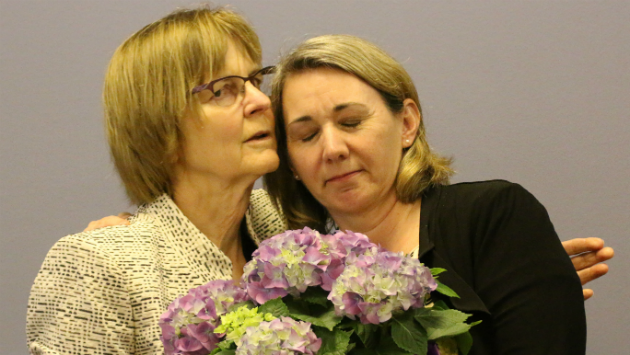 Proclamation given to Alderman Coleen Burrus, 9th Ward, on her retirement from the Council … aldermen laud her work on the council since 2009. Burrus is taking a job at Princeton University in New Jersey.

Fiske says she doesn't support invisible pet fences. Asks if there's a potential legal liability for city if such fences are permitted.

Corporation Counsel says anybody can sue about anything.

Rainey says she doesn't favor them either.

Mayor asks whether people who already have the fences would have to move them?

Tendam, who introduced the ordinance, says he doesn't know.

Community Development Director Mark Muenzer says would be considered non-conforming and people wouldn't have to move an existing fence.

Fiske says she's opposed to having so much parking off-site at city parking garage. Says it isn't the direction the city ought to be moving.

Wilson says sees this as an experiment — the primary factor he sees is minimizing the negative impact on the adjacent property (of having a huge parking deck on the site) and also notes the transit-oriented nature of the project.

Says the developer's affordable housing proposal is "pretty extraordinary" — in a good way.

Rainey says it's an extraordinary agreement. But is concerned about how the $400K will be administered and by whom. Wants staff to come to council — says is very concerned about turning the money over to a not-for-profit to rehab units downtown.

Holmes says its a creative idea and happy to support it. Suggests staff talk to housing commission about next steps.

Fiske says very difficult when the not-for-profit isn't named to vote or this.

Rainey … Says she's getting fed up with the council-bashing that goes on here. Says just because you hear it at the podium during public comment doesn't mean its true. Says Harley Clarke Committee has received a lot of information. Nobody's spent any money on a bowling alley. Only the contractor's group was interested in taking over the 1817 Church building. Says it comes from people who have nothing better to do than make up stories.