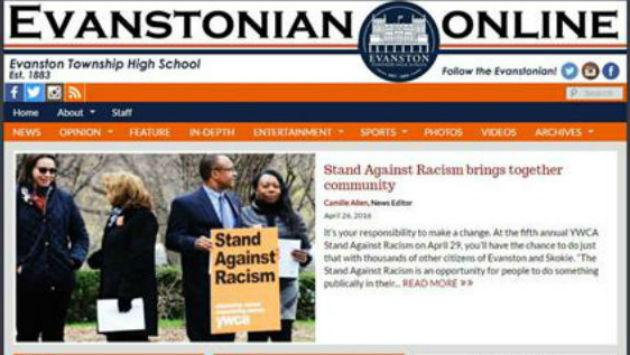 A group of student journalists brought a lawyer with them to this week’s District 202 Board meeting to contest the confiscation by school authorities of a recent issue of the school newspaper, The Evanstonian.

Trinity Collins, a news editor, said the Sept. 22 issue was confiscated by school authorities during the distribution period allegedly because of a series of four articles on marijuana usage, including an interview with a drug dealer.

Purpose of the articles, Collins said, was to determine why so many students smoke marijuana, “not to promote any usage or to encourage any student usage.”

After about an hour after distribution of the issue began, she related, a department chair confiscated undistributed copies.

Margo Livitan online executive editor of The Evanstonian, said “it came as a surprise when our most recent issue was confiscated” because the school…and the community… has always been supportive of free speech and freedom of the press.

Katy Donati, executive editor, told the board that she was disappointed in the lack of explanation the students received for the action.

“We attempted to set up a meeting with one of the administrators,” she declared, “to get an explanation, but no response was given.”

Then Michael Colton, executive editor of The Evanstonian, dropped the legal bombshell on the board, noting that last year, the Illinois General Assembly enacted the Student Free Press Act, that forbids the school administration from censoring a student newspaper unless certain criteria are met, none of which, they contended, was involved in the ETHS incident.

He was followed, during the Public Comment section of the meeting, by a volunteer lawyer, Maryam Judar, executive director, Community Lawyer Citizen Advocacy Center, who spelled out the specifics of the Illinois law that she said was being violated by the ETHS administration.

“The school must be able to show that the action was caused by more than the mere desire to avoid discomfort or unpleasantness that always accompany an unpopular viewpoint or a controversial topic,” she asserted.

“It appears that the action of school authorities,” she continued, “was based upon an urgent wish to avoid a controversy which might result from this expression, and this is unlawful in the State of Illinois.”

In practice, the board does not immediately comment upon statements made during the Public Comment section of the meeting, but when Board President Pat Savage-Williams asked if there was any new business to come before the board, member Jonathan Baum said “I would like us to discuss the confiscation of The Evanstonian at our next board meeting in open session.”

“On September 22, 2017, the Evanston Township High School (ETHS) student newspaper published a series of articles under the heading The Pot Thickens… The two-page spread features six articles, including 6 Questions for a Drug Dealer and School Stress Causes Marijuana Usage. Both articles promote illegal conduct that also violates school policy. For example, the Drug Dealer article states that a reason to sell marijuana is to make money, as much as one hundred-sixty dollars per ounce. The School Stress article states that using marijuana makes a student funnier and more confident. The article goes on to state that a “feeling of euphoria and bliss” is caused by a chemical in marijuana.

“Dr. Marcus Campbell, Principal of ETHS, collaborated with the ETHS administrative team and legal counsel in reviewing the published articles. Dr. Campbell determined that the articles glorify both drug use and drug dealing, messages that are detrimental to ETHS students.

“The U.S. Constitution and the Illinois Speech Right of Student Journalists Act both provide student journalists with certain rights to speech that ETHS celebrates. Those rights are limited. When student journalism incites unlawful acts, violation of school policy, or disrupts the school, the administration has the authority to impose limits. The articles on September 22, 2017 did cross these lines and were removed from circulation for that reason.”