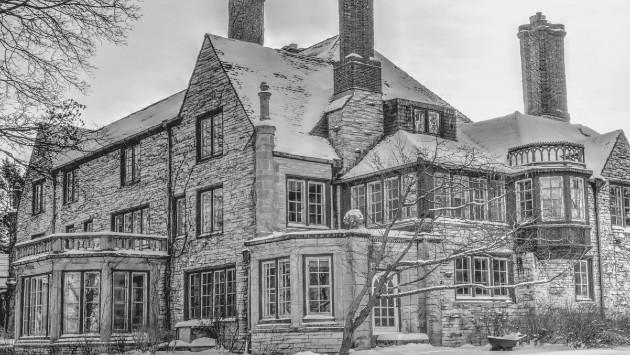 A photo of the mansion from the Evanston Conservancy Benefit Corporation proposal.

The aldermen will also hear public comment on the proposals.

But the issue is presented on the City Council agenda as a discussion item, and a staff memo indicates city staff has “not provided any analysis regarding the scope, manner or capabilities of any of the submissions.”

Thus it seems unlikely that the aldermen will reach any clear decision about what to do with the city-owned property at Monday’s meeting, which is scheduled for 6 p.m. and will be conducted remotely and be broadcast on the city’s YouTube channel.

The four groups initially submitted their proposals by a Feb. 28 deadline and they had been scheduled to make presentations at a special Council meeting May 18. But that meeting was delayed until now because of the coronavirus pandemic.

Proposals submitted to the City of Evanston for reuse of the lakefront Harley Clarke mansion call for significantly different uses of the property and offer dramatically different levels of detail about how the projects would be funded.

Copies of three of the four proposals were released by the city late on Friday, March 6, and the remainder of this story repeats the summary of the proposals that Evanston Now published the next day.

The most detailed plan for funding the project is provided by the Evanston Conservancy Benefit Corporation.

That group, headed by Richard Murray and Trish Stieglitz, envisions subleasing space in the building to “high quality, rent-paying tenants.”

The Evanston Conservancy proposal envisions raising about one third of its estimated $4.9 million cost of restoring the mansion, coach house and gardens from investors who could receive a variety of tax credit benefits and who might receive “10-year internal rates of return ranging from 5% to 15%.”

It anticipates the rest of the funds would come from “market-rate bank financing and a reasonable level of grants and donations.” It proposes that all the restoration work would be completed before the building would reopen in mid-2022.

The group is seeking a 99-year lease from the city and proposes a $1 per year lease payment — with the city also entitled to a share of any surplus if investor returns exceeded certain targets, provided the city permitted it to hold six or more group events at the mansion with 75 or more attendees each month.

The group anticipates employing an executive director who would live on-site in an apartment in the coach house and would be paid $75,000 a year.

The group that has been seeking to lease the mansion from the city for years is Evanston Community Lakehouse & Gardens.

The Lakehouse group, headed by Emily Guthrie, claims to have identified potential supporters with a “donor capacity” of over $4 million and anticipates hosting a range of conferences and group events and providing a cafe at the mansion.

It anticipates spending $4.26 million to renovate the mansion and coach house in four phases.

It plans to reopen the first floor of the mansion before doing work on other areas but does not provide a schedule for completing the work.

It envisions restoration of the Jens Jensen gardens occurring in a fifth phase and does not provide a cost estimate for that.

The group is seeking from the city an initial 20-year lease with four 10-year renewal options and proposes a $1 per month lease payment.

It anticipates by year five hosting about 11 events per month at the mansion and generating about $368,000 in revenue against $256,000 in expenses.

Those expenses would include a full time executive director paid $80,000 and three part-time assistants at $25,000 each.

It anticipates the city would enter into a separate lease for the coach house and gardens with the Jens Jensen Gardens in Evanston group.

The Book House group, headed by author Audrey Niffenegger, says it has raised $54,000 from 189 donors so far and has $564,000 in pledges. It hopes to raise additional funds from a variety of foundations.

The group is seeking a 40-year lease with a graduated payment schedule that would total $720,000 over the term.

It plans to become “a place where artists, writers, readers and other thoughtful people gather to learn and create” and would “promote the literary arts and the crafts of book making.”

It anticipates completing renovations and opening the property to the public in 2024.

The group did not submit an annual operating budget, but provided information indicating that a typical week of classes would generate $10,440 in tuition revenue and that the part-time instructors for those classes would be paid just under $2,970 for the week. It also estimates $80,000 in annual operating costs, not including staff.

The full proposal from the ONE Community Museum has not been released by the city and information currently available on the group’s website is insufficient to compare its proposal to the other three.