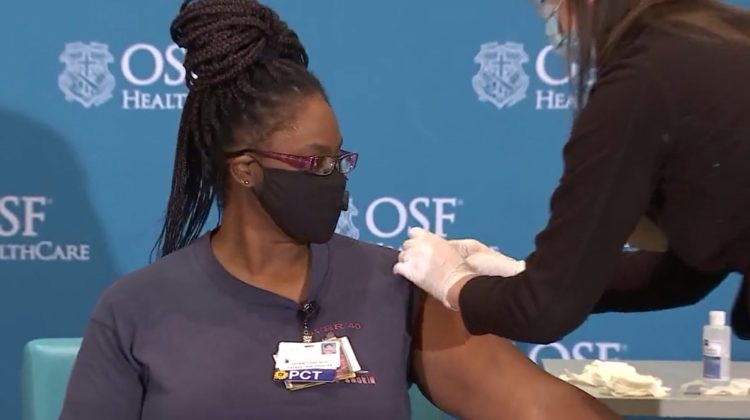 A health care worker at St. Francis Medical Center in Peoria this morning became the first person in Illinois to get the COVID-19 vaccine. (Still frame from State of Illinois video)

Some health care workers in Illinois received their first COVID-19 vaccine shots today — but that hasn’t happened yet in Evanston and other Chicago suburbs.

Workers at St. Francis Medical Center in Peoria and at Loretto Hospital in Chicago’s Austin neighborhood did get shots today.

In addition to Evanston’s Health Department those would include the Skokie, Cook County, Lake County and Chicago health departments.

Ike Ogbo, director of Evanston’s Health Department, said Monday that the city hopes to have its vaccine distribution plan in place by midweek.

Gov. J.B. Pritzker this afternoon said there’s been no delay in getting the vaccine to the suburban hospitals — they weren’t scheduled for any deliveries today.

Pritzker said that in addition to major cities like Chicago, which are being allocated their own supplies of vaccine by the federal government, the state is coordinating with 50 counties that have had the highest rates of COVID infections and 96 local health agencies across the state to organize the distribution program.

He said the vaccine the state receives is being repackaged to go to regional hospital centers and from there individual county health departments pickup the vaccine for distribution to local hospitals.