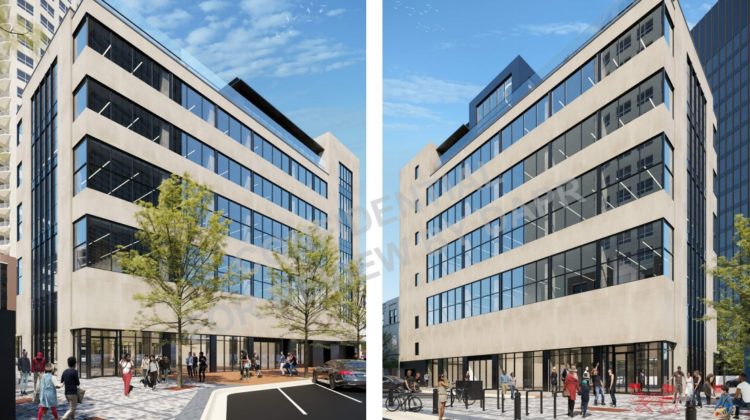 Renderings of planned renovations to the Fountain Square building showing the Orrington and Sherman avenue facades..

Preliminary plans for an extensive upgrade to the Fountain Square Building have been presented to Evanston’s Design and Project Review Committee.

Jeff Shapack of Shapack Partners told the committee he’s part of a group that recently acquired the building from long-time owner Ted Mavrakis.

Shapack said the new owners plan to restore the limestone façade of the building and replace all of the window glass in the office building.

The plans also call for creating a fresh look for the ground floor storefronts and relocating the building’s elevator core to create a more efficient layout.

The office building entrance would be moved to the Orrington Avenue side of the building so more of the Sherman Avenue frontage can be devoted to retail space.

Shapack said his firm has been doing building rehab work in the Chicago area for 20 years, with an emphasis on the Fulton Market area.

At Wednesday’s meeting, Cade Sterling of the city’s planning staff said the building was an interesting example of late art moderne or early modern style architecture that had been “bastardized over many years of its life.”

He praised the developer’s plans for upgrading the property, as did several other committee members.

City staff did suggest including bird-friendly glass in the project, upgrading the sidewalk on the Orrington Avenue side of the building to current city design standards and taking extra care not to damage the new glass War Memorial in the square during construction.

The plans will need to return to DAPR at some point in the future for a final approval. No schedule for that was mentioned during last week’s meeting.