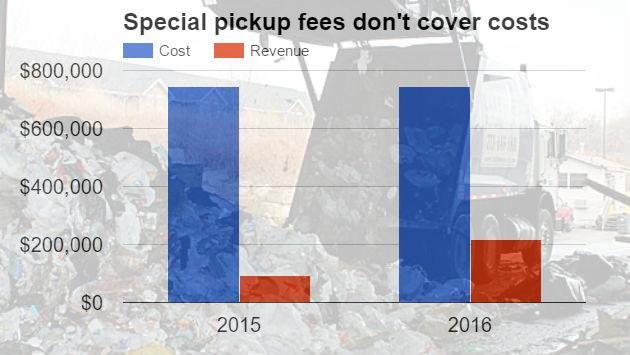 Evanston aldermen Monday moved toward more than doubling the fee for special trash pickups — but the increase would still see the program only recovering a fraction of its costs.

For years the city has charged just $25 for the first three cubic yards of trash removed with a special pickup and $10 per cubic yard beyond that.

But that raises only about $91,000 a year in revenue, Stoneback says — or about 12 percent of what it costs to provide the service.

To fully cover the cost, he added, the fee would have to rise to about $60 a yard, with a three-yard minimum.

But that big an increase, he said, probably wouldn't be acceptable to residents — so he proposed, and the aldermen agreed to introduce an ordinance to increase the charge to $60 for the first three cubic yards, with no change in the $10 rate for each cubic yard beyond the first three.

That, Stoneback said, should raise revenue to about $216,000 — or about 29 percent of what the service costs.

The city has gradually moved to increase all its refuse rates over the last several years, which has substantially reduced, but not completely eliminated, their operating deficit.

A final vote on the rate increase is scheduled for the Council's May 9 meeting.