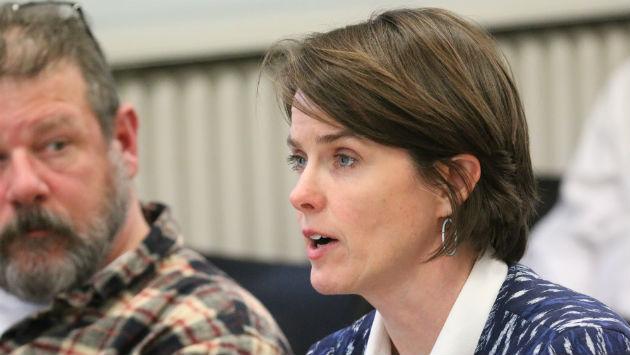 Ann Moroney, president of Johnson Research Group, an economic development consulting firm hired by the developers, said that without the city aid the $25 million project would show no profit to the developer. With the aid, she said, the developers would see an internal rate of return of just under 10 percent.

Figures presented by the developers indicate that the townhouse development would generate nearly $11.5 million in additional tax revenue for the Chicago Main Tax Increment Financing District by the time the TIF closes in 2037.

A rendering of one block of the homes planned for 910-938 Custer Ave., the site of the former Dard Products factory and warehouse.

Accepting city financing would obligate the developers to double their contribution to the city’s affordable housing fund, from $500,000 to $1,000,000.

The city’s community development director, Johanna Leonard, said consideration of the TIF funding was outside the scope of review by the Design and Project Review Committee. But after considering revised design plans for the development, the committee voted to recommend the project to the Plan Commission for approval.

The revised plans included more details on efforts to improve the energy efficiency of the homes and a proposal for nearly $250,000 in potential public benefit improvements in the neighborhood, ranging from new plantings along the railroad right of way to new playground equipment for Fitzsimmons Park.

While design plans for the development will go before the Plan Commission at a meeting at 7 p.m., Wednesday, Feb. 13, in the City Council Chambers, the review of the proposed TIF funding will be handled by the city’s Economic Development Committee at a date not yet determined.

Both the design and funding of the planned development project will ultimately be subject to approval by the City Council.