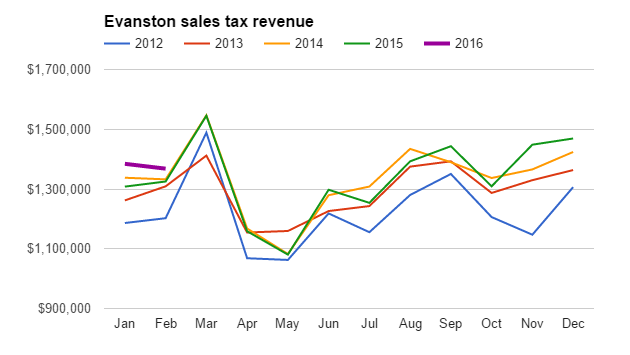 The revenue numbers now are better for Evanston than they have been at any time in the last five years.

Evanston still dramatically lags many neighboring communities that have large regional shopping centers in the amount of sales tax revenue generated per capita. 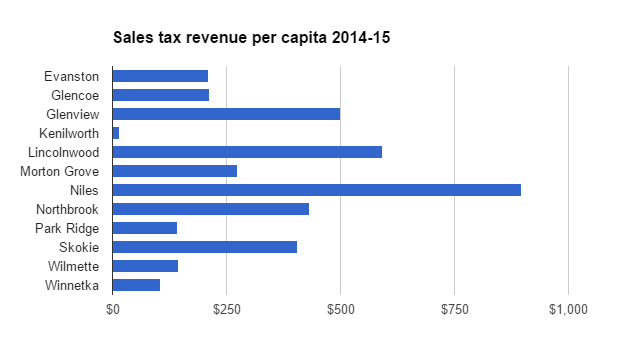 For the state's 2014-15 fiscal year, which ended last June, Evanston ranked seventh among a dozen north suburban communities on that measure — generating just $211 per person in sales tax income to the municipality, compared to $897 in Niles, $592 in Lincolnwood, $500 in Glenview, $432 in Northbrook, $405 in Skokie and $274 in Morton Grove.

The Evanston numbers were also far below the statewide average of $383 in municipal sales tax revenue per person.

Looking at the period from 2008 through 2015, Evanston's sales tax revenue increase was 9.7 percent — slightly below the 10.1 percent increase in the consumer price index over that period. That was lower than the statewide increase of 12.1 percent and weaker than the performance of 7 of the 12 communities in the north suburban comparison. 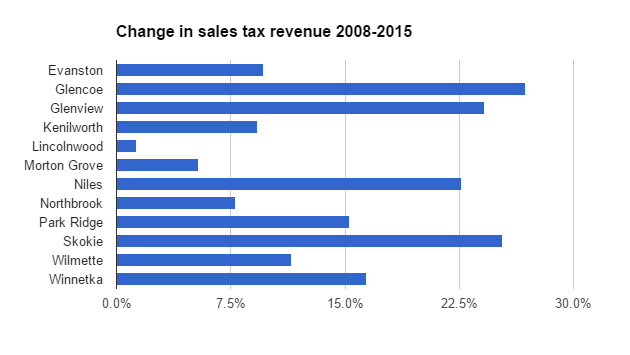 The relatively weak sales tax performance means Evanston has to rely more heavily on the property tax and other revenue sources to pay for city services than the towns with stronger retail markets. Evanston now gets about $16 million in sales tax revenue a year, or about 6.6 percent of its total annual spending, compared to $39 million from property taxes.

City officials are hoping Evanston will get another boost in its sales tax numbers later this year, with the scheduled opening of the new Autobarn service facility in the former Shure headquarters building at 222 Hartrey Ave.

According to numbers from Costar Group Inc. quoted in a city economic development report last week, the conversion of that property has pushed Evanston's industrial vacancy rate to less than 1 percent, down from 8 percent a year ago..

The retail vacancy rate in Evanston is now at around 6 percent — slightly lower than that for the north suburbs as a whole or for Chicago's Loop, and down from 10 percent a year ago.

With little new retail construction underway, those low vacancy rates may constrain the opportunities to further improve the sales tax revenue picture in Evanston over the next few years.