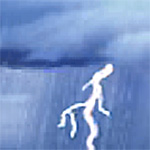 Update 10:44 a.m. The National Weather Service has extended a flash flood warning for Evanston until 4:30 this afternoon, and city officials say 1.5 inches of rain had fallen here by shortly after dawn.

(The flash flood warning previously had been scheduled to expire at 11:30 a.m.)

But city Utilities Director Dave Stoneback says the Metropolitan Water Reclamation District's deep tunnel is relatively empty "so we do not expect basement flooding at this time, or any need for the District to open the locks" at Wilmette harbor.

Stoneback says street flooding will be the biggest issue today, because sewer grates are often blocked with leaves and grass clippings at this time of year.

"Crews are driving around cleaning debris off the grates," Stoneback says.

ComEd reports just one power outage in Evanston at this hour. A downed tree near Florence Avenue and Seward Street has knocked out power to fewer than five customers.

Unlike last night's rush hour, when a power failure near Howard Street disrupted service on the Red, Purple and Yellow lines, CTA rail service is reported operating normally this morning.

Update 10:23 a.m. 6/26/13: One person reports a tree knocked down in Smith Park at Lyons Street and Ashland Avenue, another reports street flooding on Brown Avenue at Grant Street and a resident in south Evanston reports about 3.7 inches of rain — more than twice that recorded at the official city rain gauge at the Municipal Service Center.