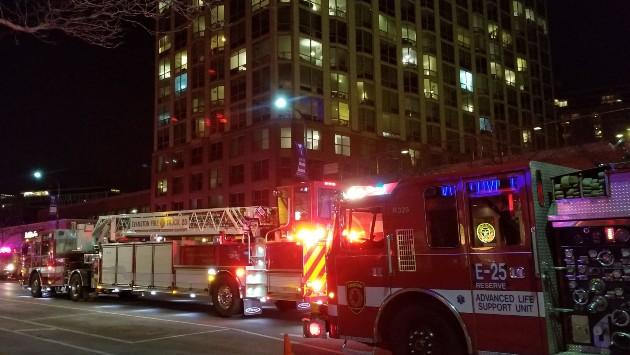 A fire broke out on the 11th floor of the Park Evanston apartment tower at 1630 Chicago Avenue shortly after 7 p.m. this evening.

Fire crews from Evanston and several neighboring communities responded to the scene.

Fire officials on the scene say the kitchen fire triggered the building’s sprinkler system which contained the fire until responding fire crews were able to extinguish it.

The occupants of the apartment where the fire began were able to escape safely and no injuries have been reported.

Fire units are still cleaning up at the scene as of shortly after 8 p.m. Fire officials say there was some smoke and water damage to the unit where the fire began and residents of that unit may be temporarily displaced as a result of the fire.

The 24-story Park Evanston building was completed in 1997.

9:25 p.m. 3/7/20: Chicago Avenue is still closed to traffic because of emergency vehicles on the scene, but it’s expected to be reopened shortly.