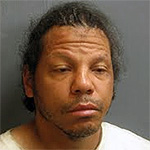 Evanston police responding to a call of a burglary in progress say they found a man trying to break into an apartment early this morning in the 800 block of Dempster Street.

Cmdr. Jay Parrott says Bobbie A. Clark, 46, of 1802 Lake St., was found about 12:25 a.m. in the building's rear stairwell, trying to get into a second floor apartment through a window, while a resident of the apartment was asleep inside.