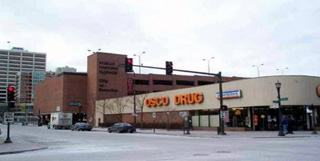 A room filled largely with aldermanic candidates got a briefing on Evanston’s tax increment financing districts Wednesday night at the Levy Center.

In response to claims by some candidates that TIFs are bad for Evanston, city staff provided a lengthy report explaining the TIF process and how it’s worked out so far.

One of the more dramatic images in the slide-show presentation was a picture taken by city staffers six years and one week ago today. It shows the west side of Sherman Avenue from Church Street south almost to Grove Street.

The site is part of the Washington National TIF, one of six such districts in Evanston.

The old Osco drug store is in the foreground, with the old city parking garage south of it. The south end of the block, facing Davis, has already been demolished in preparation for construction of Sherman Plaza. In the background, the Optima Towers and Rotary International high rises are visible.

There’s no sure indication of the time of day when the photo was taken, but from the shadow on the garage it appears to be late morning. Some metered parking spaces are empty and we can see only two pedestrians standing outside the entrance to the Osco. 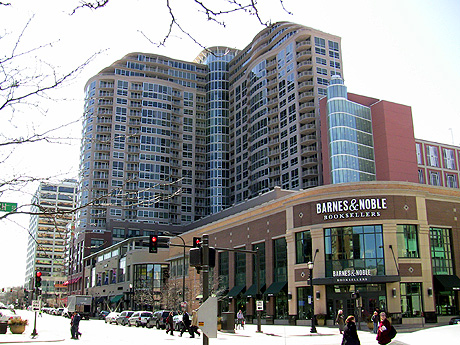 A new picture, taken about 1 p.m. today from roughly the same spot, shows the dramatic change in the scene. The Barnes & Noble store dominates the foreground. The Sherman Plaza condo tower fills the center of the frame, with the new city garage tucked behind it on the upper right.

The on-street parking spaces are filled, and at least a dozen pedestrians are visible on the street.

By the numbers, the city staff says, equalized assessed valuation of property in the Washington National TIF district that includes the Sherman Plaza block has increased 257 percent since the TIF’s establishment in 1994 from $25.7 million then to $91.9 million in 2007.

That compares to a 174 percent increase in assessed valuations across the city as a whole during that time. 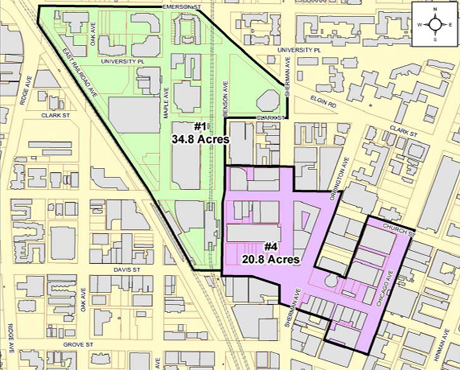 And it has potential for further increase in value if the proposed Fountain Square tower project is given final approval by the City Council next week and is ultimately built, despite the soft real estate market.

But the Washington National TIF is only in the middle of the pack among the city’s TIF districts in terms of the percentage increase in property values during its life.

It started with much higher initial property values than the city’s first TIF district formed in 1985 and centered on the underdeveloped triangle of land between Evanston’s two rail lines. 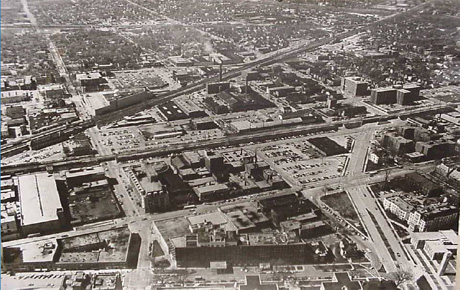 An aerial view of downtown Evanston in the 1970s looking west, showing the city incinerator and surface parking lots between the rail lines.

Called the Downtown II TIF. That district initially had only a third of its developable land on the tax roles — ownership of the rest was split between the city and Northwestern University.

As former Assistant City Manager Judy Aiello recalled at the meeting, it housed the city incinerator and public works yards, and a variety of similar uses for the university.

During that period, the overall gain in taxable values across the city has been 372 percent

Major developments in the Downtown II TIF area include the Century Theatre complex and the Optima Views condo tower.