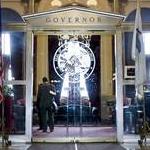 SPRINGFIELD — The arithmetic behind Gov. Pat Quinn's first budget proposal of the new year is grim. Illinois will face an $800 million deficit within three years, despite tax revenue projected to grow by more than $1 billion a year.

SPRINGFIELD — The arithmetic behind Gov. Pat Quinn's first budget proposal of the new year is grim. Illinois will face an $800 million deficit within three years, despite tax revenue projected to grow by more than $1 billion a year.

"These projections clearly demonstrate that action must be taken to control not only Medicaid costs but also (pension) costs or all other areas of government will continue to be squeezed," Kraft said in a statement.

The governor's fiscal outline is part of the state's Budgeting for Results initiative. Lawmakers created this process in 2011 to force the governor to craft a realistic budget within the financial means of the state.

The majority of the additional spending will be on public employee pensions.

Quinn's own numbers project an $818 million deficit by 2015, even after holding spending flat on Medicaid, elementary and high school funding, and state government services.

"If we don't respond to the spending increases built into the governor's budget for public pensions, Illinois is going to face a major cliff," said Rutherford.

The treasurer said lawmakers are going to have to lower the pension costs for current state employees, despite the stance by Illinois Senate President John Cullerton's office that legislation to alter current pension benefits is unconstitutional.

"Go and take the constitutional fight," Rutherford said. "If it has to be litigated all the way to the Illinois Supreme Court, then so be it."

State Rep. Frank Mautino, D-Spring Valley, who is the Democratic budgeteer in the House, said he doesn't think lawmakers will go that route this year.

"We're starting to see some savings, because pension costs are already going down," Mautino said. "The big savings come in 2018. That's when you'll have more people in the new system than the old system."

Lawmakers created a two-tiered pension system in 2010. Any state employee hired after Jan 1, 2011, has to work until they are 67 to collect a full pension, five years later than state workers on the job in 2010.

Mautino said the only place lawmakers can find immediate savings is in Illinois' Medicaid system.

House Republican budgeteer state Rep. David Harris, R-Arlington Heights, said he expects Medicaid costs to grow at nearly 8 percent a year for the next few years. Illinois is slated to spend $7 billion on Medicaid in the current state budget, about a fifth of the $33.2 billion spending plan.

"The Medicaid system is going to have to recognize that the dollars from Springfield are not going to be there like they were in the past," Harris said.

Harris and his fellow Republicans have said Illinois could save billions of dollars by "trimming" people from Medicaid.

Kraft said the governor proposed a Medicaid rate cut last year, but lawmakers and Medicaid providers "did not have an appetite" for that. Instead providers and legislators opted to delay payments.

Mautino said that's not an option next year.

"The state is going to have to find another $700 million for rising Medicaid costs, and you have about $1.5 billion unpaid bills that will have to be addressed in next year's budget," Mautino said. "The spring session will be all about trimming Medicaid costs."