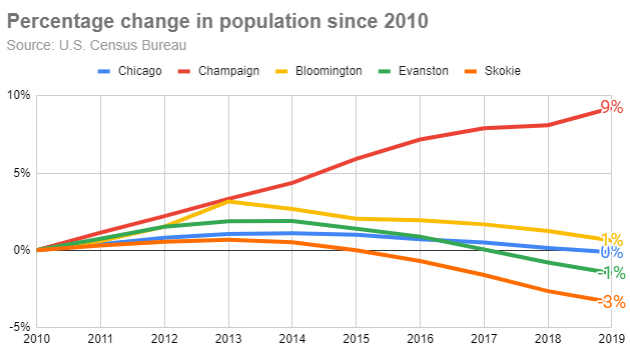 The U.S. Census Bureau released its latest population estimates for towns with 50,000 or more residents today — and they show that Evanston’s population continued a decline that’s been underway for several years.

Evanston retained its position as the 15th largest city in Illinois that it had at the start of the decade. Among the 20 largest communities in the state, only six showed population gains across the decade.

Chicago shrank proportionately less than Evanston during the period, losing just 0.13% of its population, compared to a 1.5% drop for Evanston.

The census data indicates that Evanston has been losing residents since 2014, when the number of people living here hit a peak for the decade of 75,994 and the city ranked as the 14th largest in the state.

For the Midwest region as a whole, the Census Bureau says the average city with a population of more than 50,000 has grown by 3.1% over the decade. That’s higher than the 1.5% growth rate in the Northeast, but lower than the 11.8% growth in the South and 9.1% growth in the West.