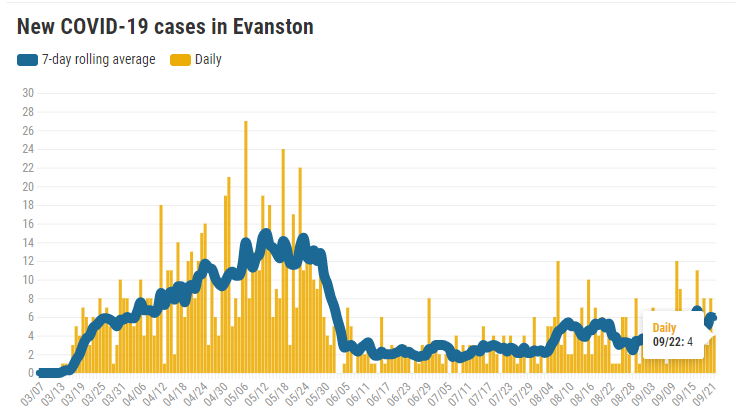 The Illinois Department of Public Health reported results of 41,829 tests, up somewhat from yesterday’s 38,234.

The City of Chicago put Wisconsin back onto its travel quarantine list today. Chicago’s health director said the coronavirus outbreak in Wisconsin is out of control with a positive rate of about 15%.

The IDPH reported tests of 97 Evanston residents today and it found seven positive cases for a positive rate of 7.2% compared to a seven-day average rate for the city of 1.7%. The state now says Evanston has had a total of 1,098 cases.

By the city’s count, Evanston has a total of 1,101 COVID-19 cases. The city’s death toll from the disease remained unchanged today at 73.

Those who died in Cook County included a woman in her 30s, two males in their 60s, two females in their 80s and a male in his 80s.

As of last night, 1,445 people in Illinois were reported to be in the hospital with COVID-19. Of those, 367 patients were in the ICU and 153 of those were on ventilators.