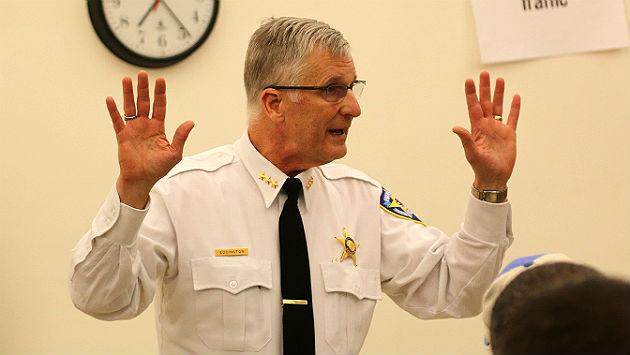 Asked at Monday’s community meeting what an Evanston resident should do if they’re pulled over by police, Police Chief Richard Eddington offered an example of a recent off-duty encounter he had with police downstate.

Eddington said he was driving home from St. Louis in his personal car when “his cell phone blew up.”

He’d been sending email messages using the voice recognition device on his iPhone and “it didn’t quite get down what I’d said” and ended up sending message to elected officials that included “coarse language.”

When he started getting replies questionning what he’d said, he realized “this had gone terribly wrong.” So he pulled over onto the shoulder of the highway and was in the middle of apologizing by email when “all of a sudden I see flashing lights go on behind me.”

“So I rolled down the driver’s side window, and the passenger window, too, because that’s the side state troopers come up on.”

“And I sit in the car, with my hands up on the steering wheel.”

“I don’t know what he thinks, I’m doing my level best to keep things calm.”

He said the officer asked what was the emergency that led him to pull off onto the shoulder, and when he said he was sending text messages, the officer suggested that wasn’t really an emergency and he should have pulled off the highway at the next exit ramp instead.

“Now I have some familiarity with the Illinois Vehicle Code, but I have no idea of his understanding,” Eddington said, suggesting getting into a discussion about it at the side of the road wouldn’t be a very good idea.

When you’re dealing with a police officer, “you don’t know what he’s been led to believe,” Eddington said. “Was he looking for a car that may have just been involved in an armed robbery? I have no idea.”

“Hopping out of the car in a situation that you’re not completely familiar with” is extremely risky, he added. 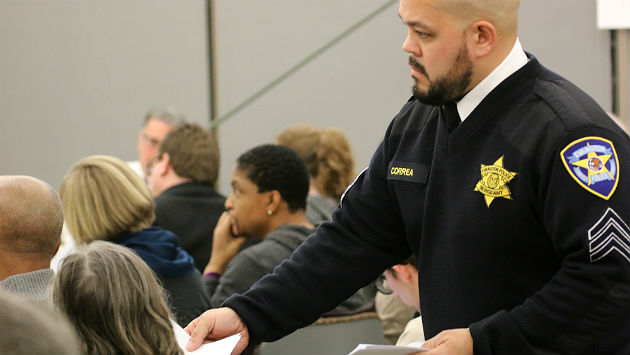 At the meeting at the Levy Center police also distributed reprints of a section of the state Rules of the Road handbook dealing with traffic stops. Here’s what that says:

Being Pulled Over by Law Enforcement

The handout from Evanston police added one more bullet point: